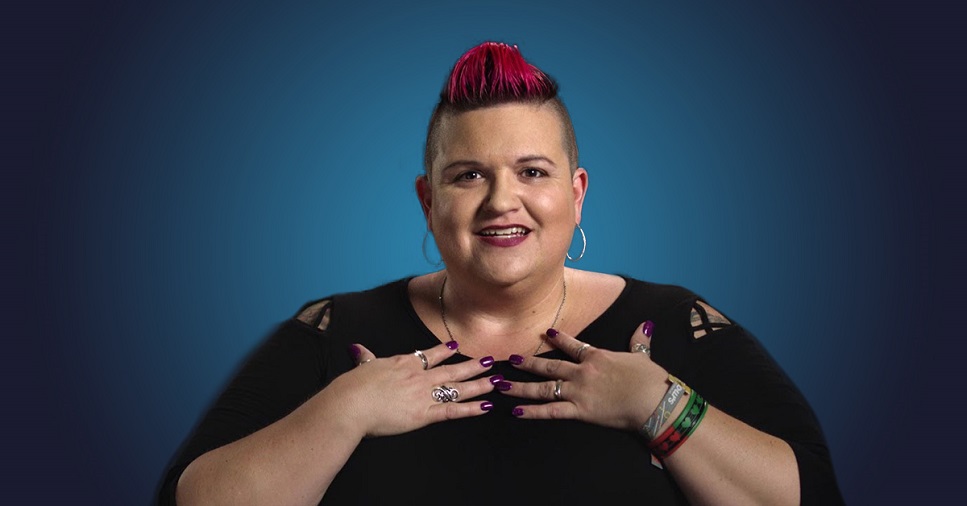 You will not believe we got to talk to this beautiful, talented and amazing sign language interpreter of concerts and music.

Amber Galloway Gallego is a world-renowned sign language Interpreter specializing in music. She has over 20 years of interpreting experience in hundreds of concerts, she proudly has a Master’s Degree in ASL/English Interpreting and holds several interpreting certifications.

Responding to a desire from the deaf community to see, experience and connect emotionally to music in the same way hearing people do, Amber developed an immersive style that brings music to life in a way not often seen in music interpreting. Deaf people that truly love and adore music often request her because they know she will bring it.

Amber has been featured in RollingStone, Oprah, The New York Times, Vibe and Out magazines. Vibe Magazine referred to her as the most recognized sign language interpreter, and “The Jay Z of Hip-Hop Sign Language”.

On television and online, Amber has been featured in Totally Biased with W B Kamal, Jimmy Kimmel Live, TEDMED, TED X, and most recently, on the Steve Harvey show. She has also worked with a handful of musicians creating music videos in sign language on their platforms making music more accessible for their fans. She is known for her activism just as much as she is for interpreting work. Amber, who also is hard of hearing, uses her status and platform to fight for access and equality in the deaf community. When she’s not interpreting, Amber is an adjunct Professor of ASL studies at Lamar University in Texas.

Amber says that the deaf community taught her everything she knows and pulled her into this profession. She’s been around deaf people since she was five years old, but she acquired more fluency in college, when she really became heavily involved in the deaf community. At that time, she used to hold Friday night parties in her house with her friends, and they enjoyed signing songs to each other. And that’s when the epiphany moment happened. She had been taught that deaf people didn’t like music, but hanging out with them she realized that all her deaf friends were enjoying music very much, so she felt the need to call out this false idea. Her friends were the first to push her to follow this career path, expressing that they wished interpreters looked like her and would do what she did. And she couldn’t help but wonder, why not?

Amber reflects on the fact that sometimes (always, to tell the truth…) those that are able‑bodied will set up this idea of what a person that is not able‑bodied is supposed to be like, so they are the ones that actually create the barriers. So, that’s why she began to figure out how to give them what they wanted, and then the deaf community requested more and more access to concerts and to music, and then it became a huge part of her career, her passion and her love. She states that every decision she makes is based on what the deaf community wants and needs, not projecting on them limitations that are not informed by them, which is what the deaf community experiences every day, the barriers that people are creating in their name.

Amber’s work is amazing, but what is really incredible about her story is that, after working as a sign language interpreter on a college campus, she got spinal meningitis. This disease almost took her life and brought about some neurological problems for her that resulted in her losing a great part of her hearing capacity. Yeah, I told you, pretty nuts. So, now she is hard of hearing and heavily depends on inner ears as well as hearing aids during the day. She’s not only working for the deaf community, but she also became part of it herself.

If you can watch Amber in action you will complete the picture of the magic she does on stage. I am not exaggerating when I say that she’s another rock star! She involves the whole body in the interpretation, it’s mind-blowing. There’s a great example she uses in her Ted talk video about the sign that means “music”, just music, which is like saying “there’s some music playing”, and that’s it. But Amber, as a music fan herself, knew that the instruments are the other voices in the song and she wanted to find a way to convey those voices as well. She says she wanted to make sure she could provide as much as she could and never make that choice for another human, so she gives everything she can and it’s up to the deaf person to choose to look or not, to be a part and connect or not.

And you can imagine that she does a great prep work before a gig. She works with a team which she loves, composed of people who are dedicated and love music, love the deaf community, and some are also deaf themselves, and they work very hard to get ready because they want the interpreters to look like an extension of the band. So, once they have the name of the band, they do research on the idea of the band and their psychological effects, to make sure that that effect is involved in the message. Then, they go over the last six months of the band’s concerts, they get all the lyrics, they memorize what the songs are about and they also memorize how the band or artist sings that song, which words they emphasize, and the whole vibe. With all this information she creates storyboards, “like movies in her head”. She says she cannot memorize every single word, but she can definitely paint a picture in her head with the story that’s being told.

Lots of hours of work, all fueled but love and passion! As we all know, interpreting is a serious business and not only prep work is hard, but the interpretation itself requires a lot of energy. The team switches interpreters every three or four songs to avoid exhaustion and make sure they give their best. She says the native signers, or “native chops” as she calls them, are amazing, born and raised in the deaf community, which gives them a lot of fluency and makes them also easier to watch.

She has also had the opportunity to go and teach her style in other countries, and some had created their own style as well. She told us about a workshop she gave in Ukraine where hearing interpreters believed that deaf interpreters could not take the workshop because they wouldn’t be able to do the job. Again, the incorrect ideas that hearing people have for deaf and hard of hearing people. And Amber allowed them to participate, they did an amazing job and they got to stage sooner than their hearing colleagues, which was awesome because she believes these openings help increase role models for other deaf and hard of hearing individuals. Amber believes in opening the doors to opportunities to stop spreading this preconceived idea of what you think someone else is supposed to be, and we cannot agree more. It applies to all walks of life, right?

She confesses that her biggest bucket list item is that artists see that there’s a community that’s often neglected and ignored, and she would love to have all musicians out there in the world saying, “I’m going to have interpreters because that’s equivalent to a speaker. Let’s put it on the budget line”.